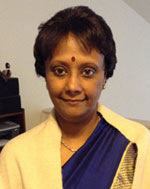 Nalini Natarajan is a Professor at the English Department, College of Humanities, University of Puerto Rico in the US, where she has been teaching at since 1987. Prior to this, she taught at Jawaharlal Nehru University, Delhi (1978–80) and Miranda House, Delhi (1984–86), and was a postdoctoral fellow at Yale University (1986–87). She obtained her Ph.D from University of Aberdeen, UK in 1984. She has written a book titled Woman and Indian Modernity: Readings of Colonial and Postcolonial Novels in 2002, and edited Handbook of Twentieth Century Literatures of India in 1996, which received the Choice Outstanding Academic Book Award. She has also contributed articles in many other books. Besides this book, she has also just completed a book published by Terranova Press, entitled ‘The Resonating Island’—a series of intercultural essays on the Caribbean and South Asia. Through her background and domicile, she combines an interest in India and its many regions, local languages and cultures, British domestic and imperial culture in the nineteenth century, feminist theory, and Caribbean and Latin American issues. She has proposed innovative courses in these areas. Her interests are travel, memoir-writing, cooking and the promotion of popular forms of inter-cultural music and dance.