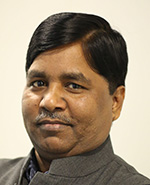 Shyamlal Yadav is one of the pioneers of the effective use of RTI for investigative reporting and asking questions of the powers that be. His work on India’s polluted rivers, Streams of Filth (India Today, December 30, 2009) was selected by UNESCO as one of the 20 best investigative reports across the globe. A member of the investigative bureau of The Indian Express, his reports like foreign travel of ministers and bureaucrats, MPs appointing their relatives as their personal assistants, bank staff putting their own money to reduce the total number of zero balance Jan Dhan accounts have had an impact and influence. He is the only two-time winner of the prestigious Ramnath Goenka Award for Excellence in Journalism in Investigative Reporting category. Shyamlal has been awarded with the Lorenzo Natalie Journalism Prize by the European Commission for Development, Brussels; Developing Asia Journalism Award by the ADB Institute, Tokyo; National RTI Award by NDTV-PCRF; Statesman Rural Reporting Award; and Ganesh Shankar Vidyarthi Award for Excellence in Journalism among others. He has addressed several conferences on RTI and Media at a range of platforms including Columbia University, New York at Rio de Janeiro; European Investigative Journalism Conferences at Brussels; Global Investigative Journalism Conference at Kiev; Asian Investigative Journalism Conference, Kathmandu. Having earlier worked at Jansatta, Amar Ujala, and India Today Shyamlal is presently Senior Editor at The Indian Express.